Protein homeostasis in the cellular environment is achieved through the ubiquitin-proteasome system (UPS) and the autophagy-lysosomal system (ALS). Together, they effectuate the degradation of both short and long-lived proteins, as well as the clearance of misfolded polypeptides and organelles.

Harnessing the power of the two protein degradation pathways for therapeutic purposes presents advantages to traditional pharmaceutical agents. For one, it eliminates the issues of drug resistance due to mutations. Secondly, it allows targeted protein degradation agents could theoretically be developed for any protein, as they don’t rely on the presence of active sites.

Perhaps the best-known targeted protein degradation technology is based on PROteolysis Targeting Chimeras or PROTAC®s. These are small heterobifunctional molecules consisting of a linker with a ligand on one end that selectively binds to the protein of interest (POI), and another ligand on the other end to engage the enzyme E3 ubiquitin ligase. The latter then recruits enzymes that lead to the poly-ubiquitination of the POI, which flags it for degradation by the proteasome. The entire pathway is shown schematically below: 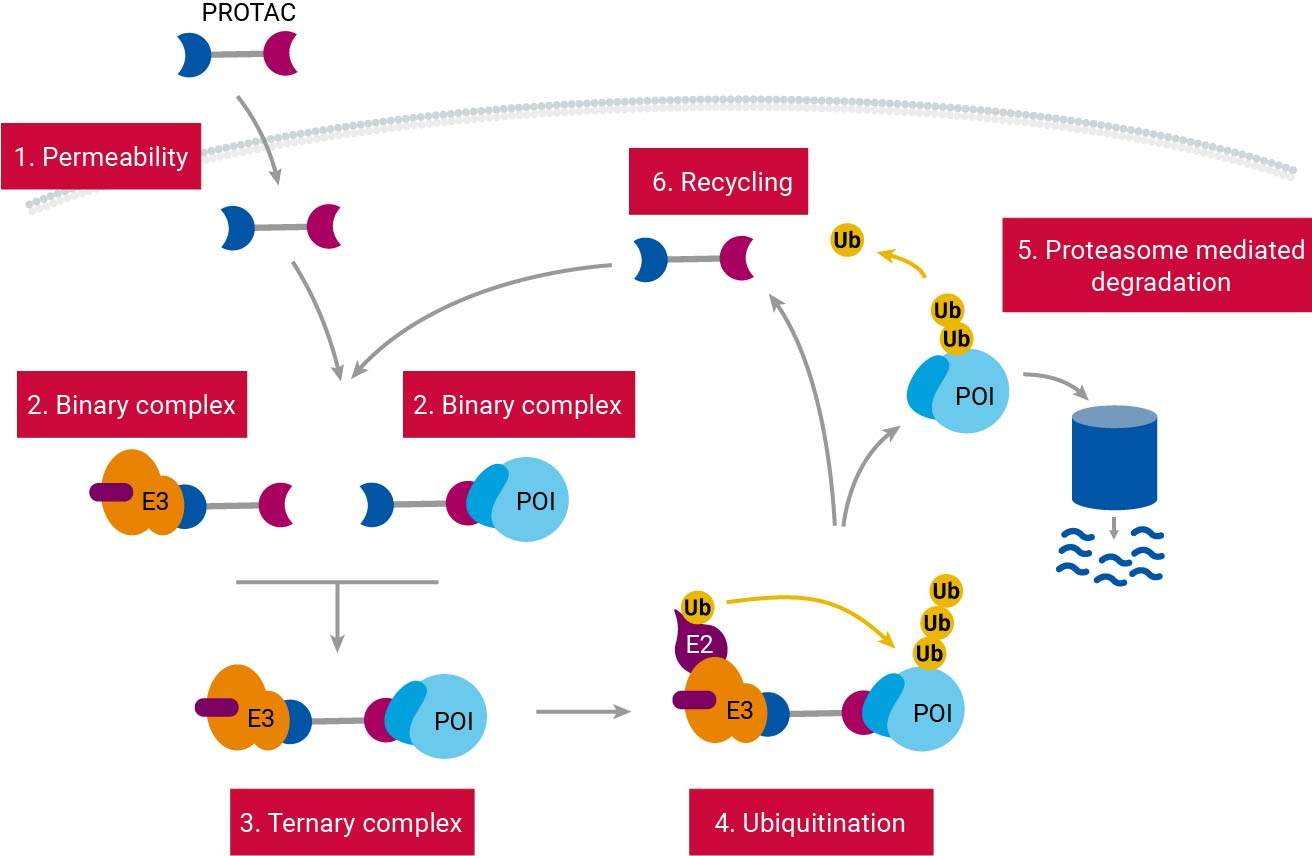 PROTAC®s induce targeted protein degradation by serving as a bridge between a POI and an E3 ligase. The resulting ternary complex catalyzes polyubiquitination of the target protein, tagging it for degradation by the proteasome.

Read on for a concise summary of PROTAC® function, important considerations for validating PROTAC® molecule mechanism of action, other targeted protein degradation technologies that make use of both the UPS and the ALS, as well as PerkinElmer assays and reagents that can help you in your discovery journey. 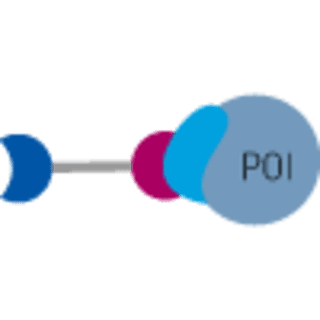 Binding to the Protein of Interest

Ensuring the PROTAC® binds to the Protein of Interest 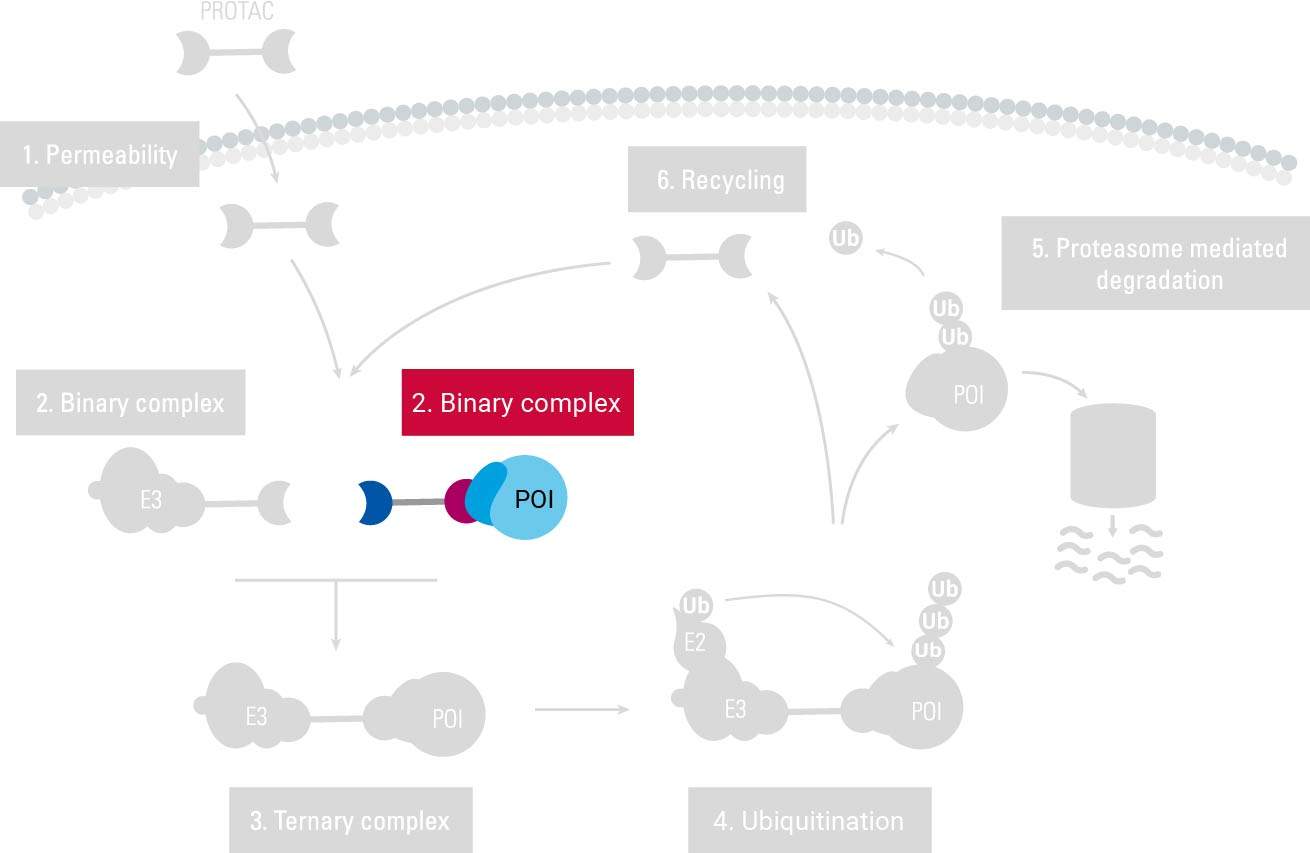 Affinity for the POI is not the only consideration when designing a PROTAC® molecule. As a therapeutic agent, the first three barriers it must overcome in an in vivo environment are chemical stability, solubility and membrane permeability.

Once in the cellular environment, the PROTAC® first forms a binary complex with either the POI or the specific E3 ligase. Successful engagement of both binding partners signals the formation of the ternary complex.

Efficient and fast compound optimization is of paramount importance in the drug discovery process. PerkinElmer offers a number of tools that can be used in PROTAC® characterization studies.

If your POI is a kinase, PerkinElmer’s biochemical offering includes three kinase activity assay kits that allow the measuring of the binding affinity of your PROTAC® binder and compatible with 80% of the human kinome. The assays are based on the competitive dissociation of a known kinase-binding inhibitor by the compound under study.

HTRF® kinase binding kits from PerkinElmer are sandwich immunoassays based on Fluorescence Resonance Energy Transfer (FRET) between a FRET donor (a conjugated anti-6HIS, anti-GST or anti-biotin antibody) and a fluorescent acceptor tracer. Competitive displacement of the tracer by the PROTAC® reduces the fluorescent signal allowing the calculation of a dissociation constant. 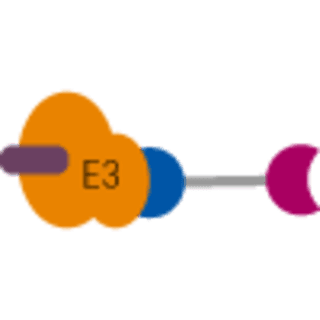 Binding to the E3 Ligase

Ensuring the PROTAC® binds to the E3 Ligase 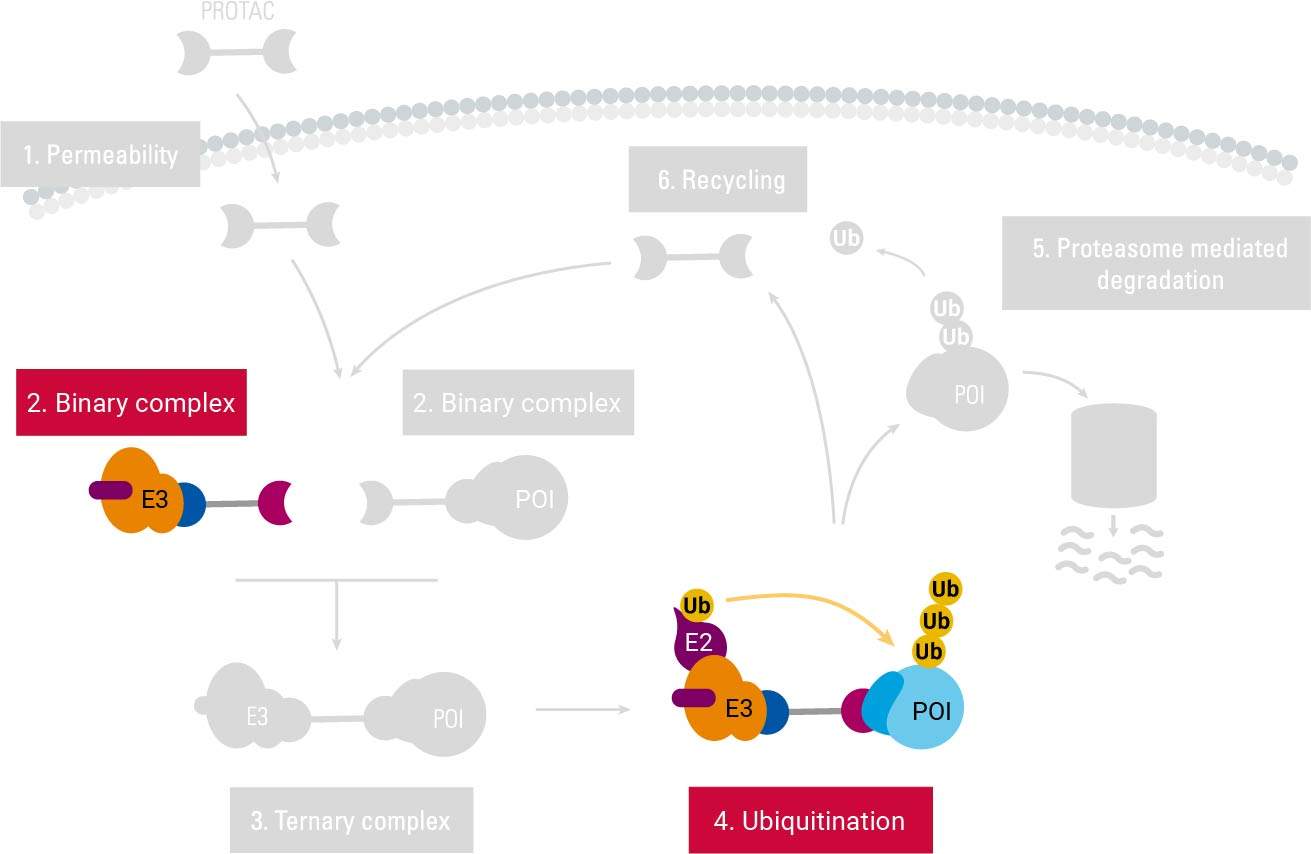 The process of ubiquitination can be sequentially repeated resulting in poly-ubiquitinated proteins which are then directed to the proteasome for degradation.

Assessing the binding of a PROTAC® to the E3 ligase

While there are only 2 E1 and 30-50 E2 genes in the human genome, the variety of E3 ligases is staggering with over 600 genes. In the context of PROTAC® design, a common binding target is Cereblon (CRBN), a protein which along with DNA binding protein 1 (DDB1), Cullin-4A (CUL4A), and regulator of cullins 1 (ROC1) forms an E3 ligase with a very wide range of substrates.

PerkinElmer can help PROTAC® development research with a range of AlphaLISA®️ and HTRF protein-protein interaction reagents, as well as AlphaLISA or HTRF Cereblon binding kits. The below sample data for AlphaLISA were generated using the PROTAC® molecule dBRD9, which forms a ternary complex with BRD9 and Cereblon; VH032, a ligand for VHL which is another E3 ligase often used in PROTAC® design; the Cereblon ligands Pomalidomide and Lenalidomide. For the HTRF assay, the compounds used were the PROTAC® molecule MT-802, which forms a ternary complex with BTK and Cereblon; the Cereblon inhibitor Pomalidomide; the VHL E3 ligase VH032. 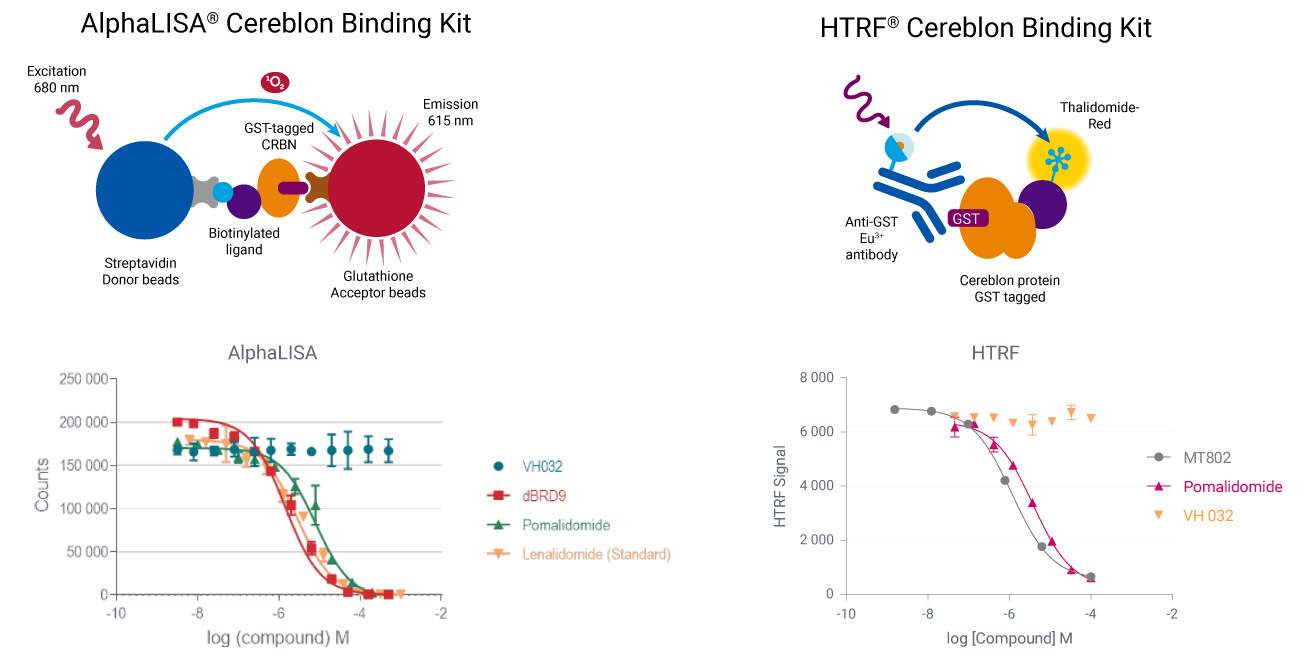 Top row: The AlphaLISA detection of Cereblon binding uses glutathione acceptor beads to capture GST-tagged Cereblon and Streptavidin-coated donor beads to capture the biotinylated ligand. Donor beads and acceptor beads come into proximity through ligand binding to Cereblon. In the HTRF assay Cereblon binding is detected using a specific GST antibody labeled with Europium Cryptate (donor) which binds to GST-tagged Cereblon and Thalidomide-Red labelled with XL665 (acceptor). Addition of a Cereblon binding compound leads to competitive displacement of the biotinylated ligand/Thalidomide red respectively, and a reduction of light emission inversely proportional to the compound’s concentration.

Bottom row: Binding of dBRD9, Pomalidomide or Lenalidomide to Cereblon reduces the signal of the AlphaLISA assay in a concentration-dependent fashion compared to the negative control VH032. Similarly for the HTRF assay, MT802 and Pomalidomide induce a reduction of FRET, whereas VH032 doesn’t. 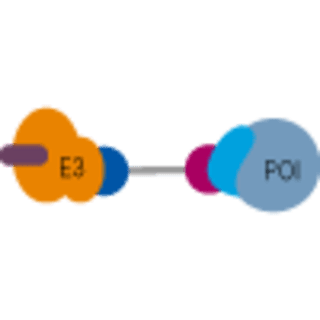 Is the ternary complex formed correctly? 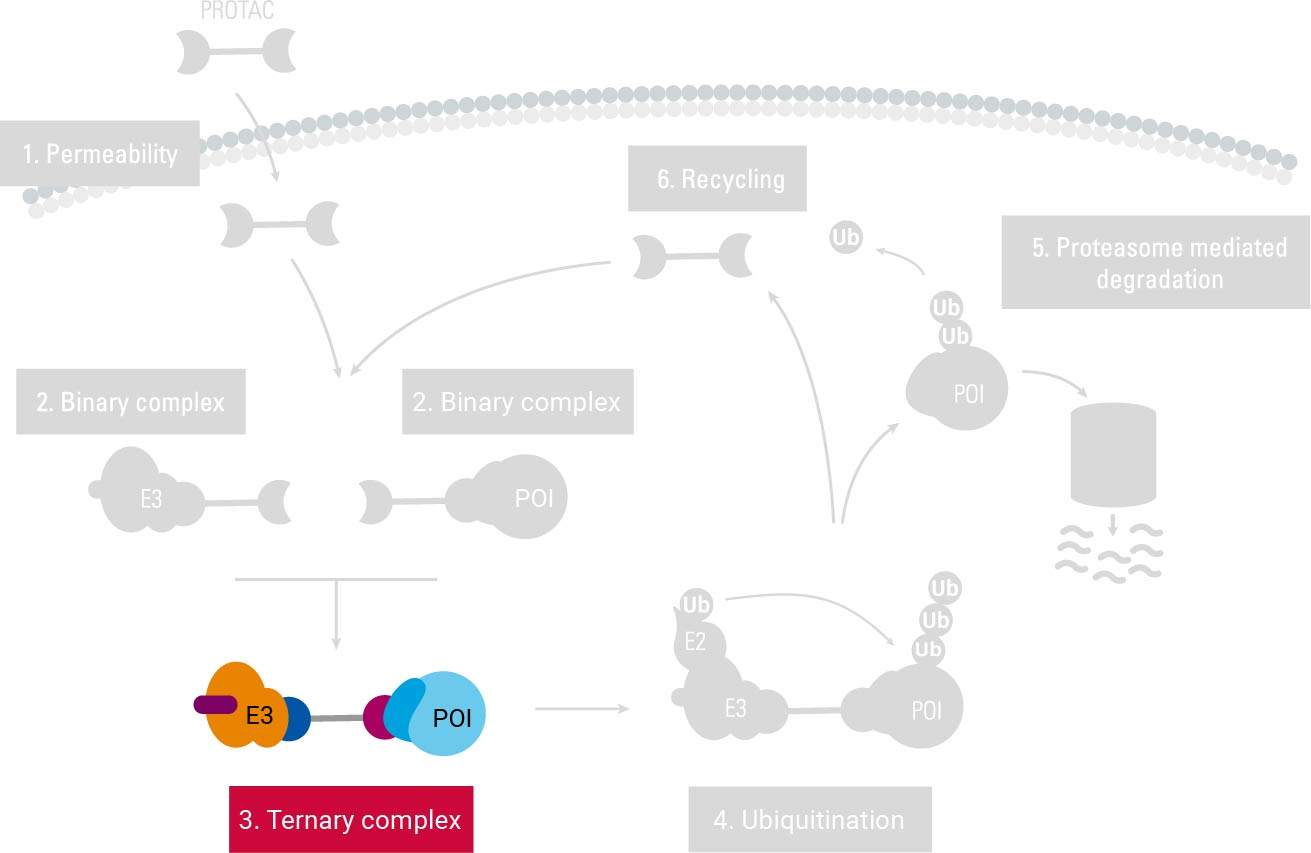 Left panel: Example bell curves constructed using an AlphaLISA protein-protein interaction assay. Compound a is more efficient than compound b in the formation of ternary complexes with BTK and Cereblon.

Right panel: Example bell-shaped curve obtained using an HTRF protein-protein interaction assay in the presence of BTK and Cereblon. Data from MT-802 demonstrate the formation of the ternary complex. As expected, the BTK inhibitor Ibrutinib, the Cereblon inhibitor Pomalidomide and the BRD9-specific PROTAC® dBRD9 do not form ternary complexes.

The CEllular Thermal Shift Assay (CETSA®) is a patented technology by Pelago Bioscience that exploits the thermal stability conferred to a protein following the binding of a compound to measure target engagement. CETSA® is unique among target engagement measurement technologies in that it requires no cloning or protein purification and can be applied to complex in vivo systems such as primary cells and lysates. Combined with Alpha® or HTRF sandwich assays by PerkinElmer, CETSA® can also be adapted to high-throughput studies and has indeed been used to screen libraries containing thousands of compounds.

The CETSA® principle. A binding event induces thermal stability to a protein, increasing its denaturation (melting) temperature. By comparing the denaturation profile between the unbound (control) and bound protein, the 50% effective concentration (EC50) for the compound can be calculated. 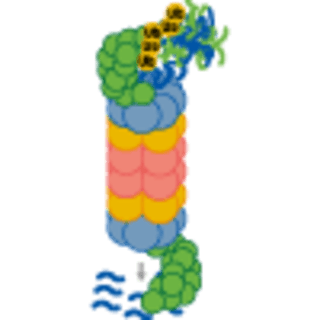 Is the target protein effectively degraded? 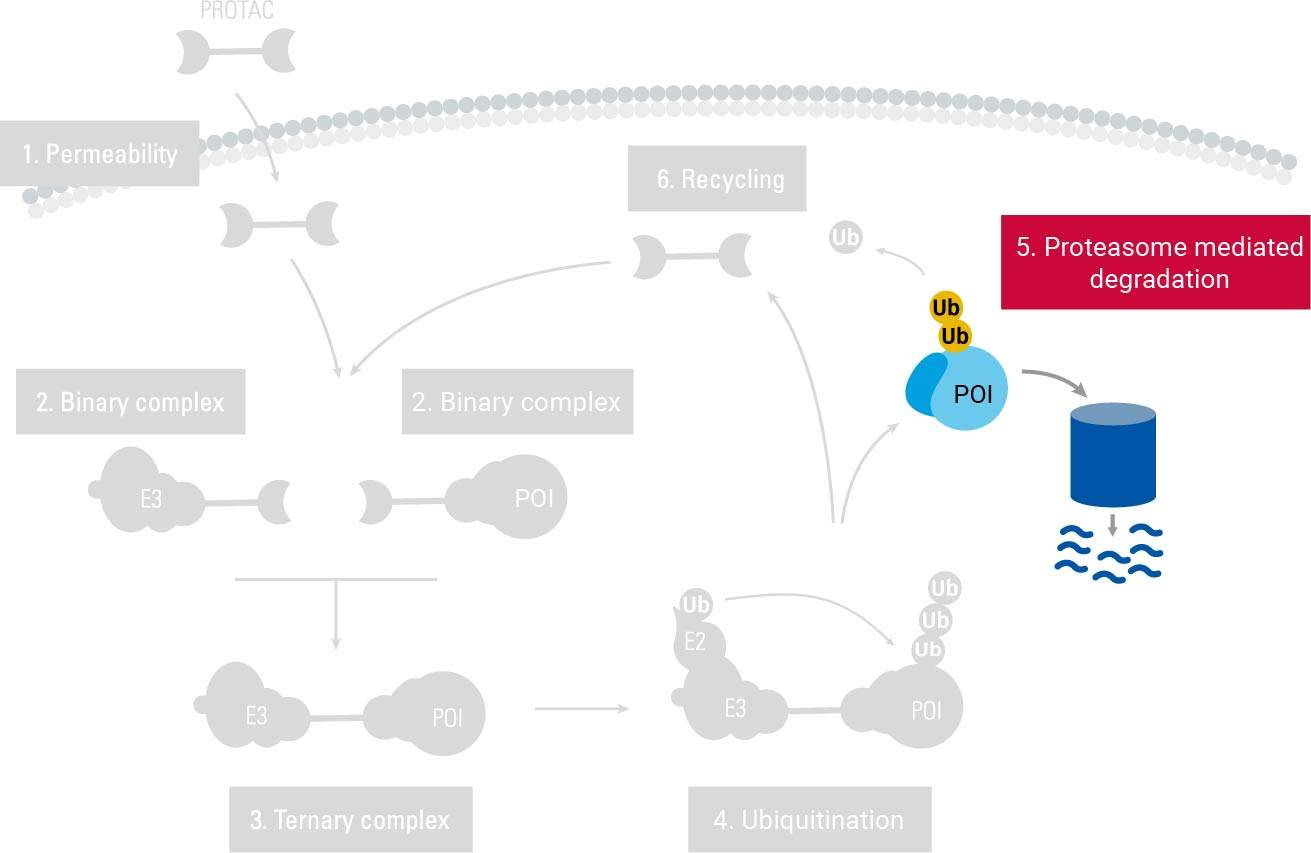 Poly-ubiquitination of the POI is followed by its recruitment by the proteasome and its proteolytic degradation. When the degradation rate of a target protein is faster than the rate at which it is being expressed, its net intracellular level decreases. If the target protein is also a pharmacological target, the effects of this decrease can be observed through downstream pathway effects. A reliable assessment of degradation is therefore an indirect measure of a PROTAC® molecule’s binding efficacy and ultimately, its usefulness as a degrader. 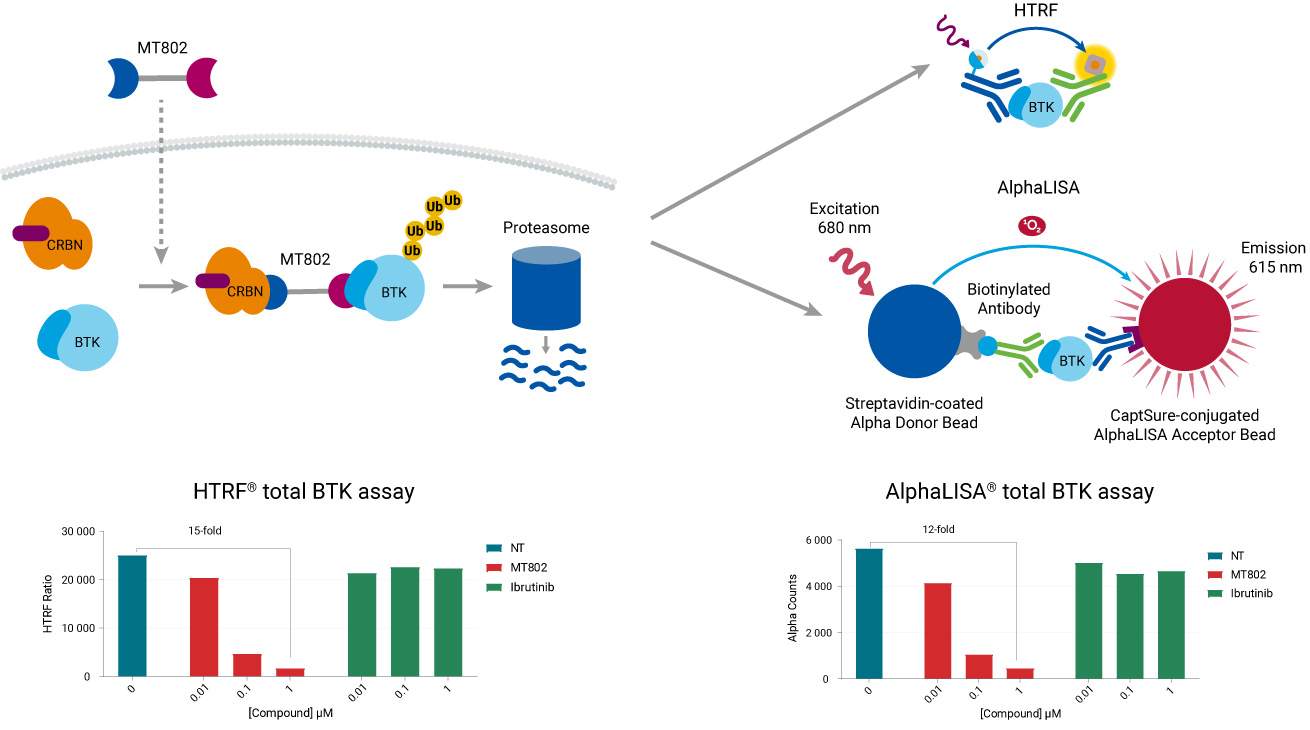 Protein degradation can be easily assessed using PerkinElmer’s total protein assays. In both examples (HTRF and AlphaLISA), use of a BTK-specific PROTAC®, MT-802 leads to a drastic reduction of the detected levels of BTK. As expected, BTK levels are not affected by increasing concentrations of Ibrutinib, a BTK inhibitor. 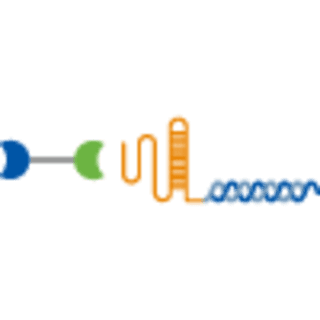 What does the future hold for Targeted Protein Degradation?

PROTAC® technology is by no means the only player in the targeted protein technology field. A number of alternative methods have been developed that utilise boththe UPS (TRAFTAC, molecular glues) as well as the ALS (LYTAC, AUTAC, ATTEC). Targeting the ALS in particular, offers some distinct advantages as it allows for the degradation of large proteins, macromolecular complexes or aggregates.

In contrast to the PROTAC® technology that relies on bifunctional degradation activation compounds (biDACs), molecular glues (or glue degraders) are monofunctional degradation activation compounds (monoDACs). These bind to either the E3 ligase or the target protein and chemically modify its surface, prompting protein-protein interactions that ultimately cause the E3 ligase to bind to the target protein, resulting in degradation. MonoDACs tend to be smaller molecules than biDACs, which could simplify optimization with respect to bioavailability and compliance with drug development guidelines. However, monoDACs’ reliance on single protein-protein interactions can weaken their ability to select the target of interest.

TRAnscription Factor TArgeting Chimeras (TRAFTACs) are heterobifunctional chimeric oligonucleotides. They consist of a double-stranded DNA moiety that recruits the transcription factor of interest (TOI), covalently linked to a Cas9 CRISPR-binding RNA. The latter binds to an ectopically expressed dCas9-HaloTag7 fusion protein. Combining the TRAFTAC with a PROTAC® molecule specific for HaloTag7 and an E3 Ligase (VHL in the original study) brings into proximity the E3 Ligase and the DNA-bound TOI, resulting in the latter’s ubiquitination and proteasomal degradation. 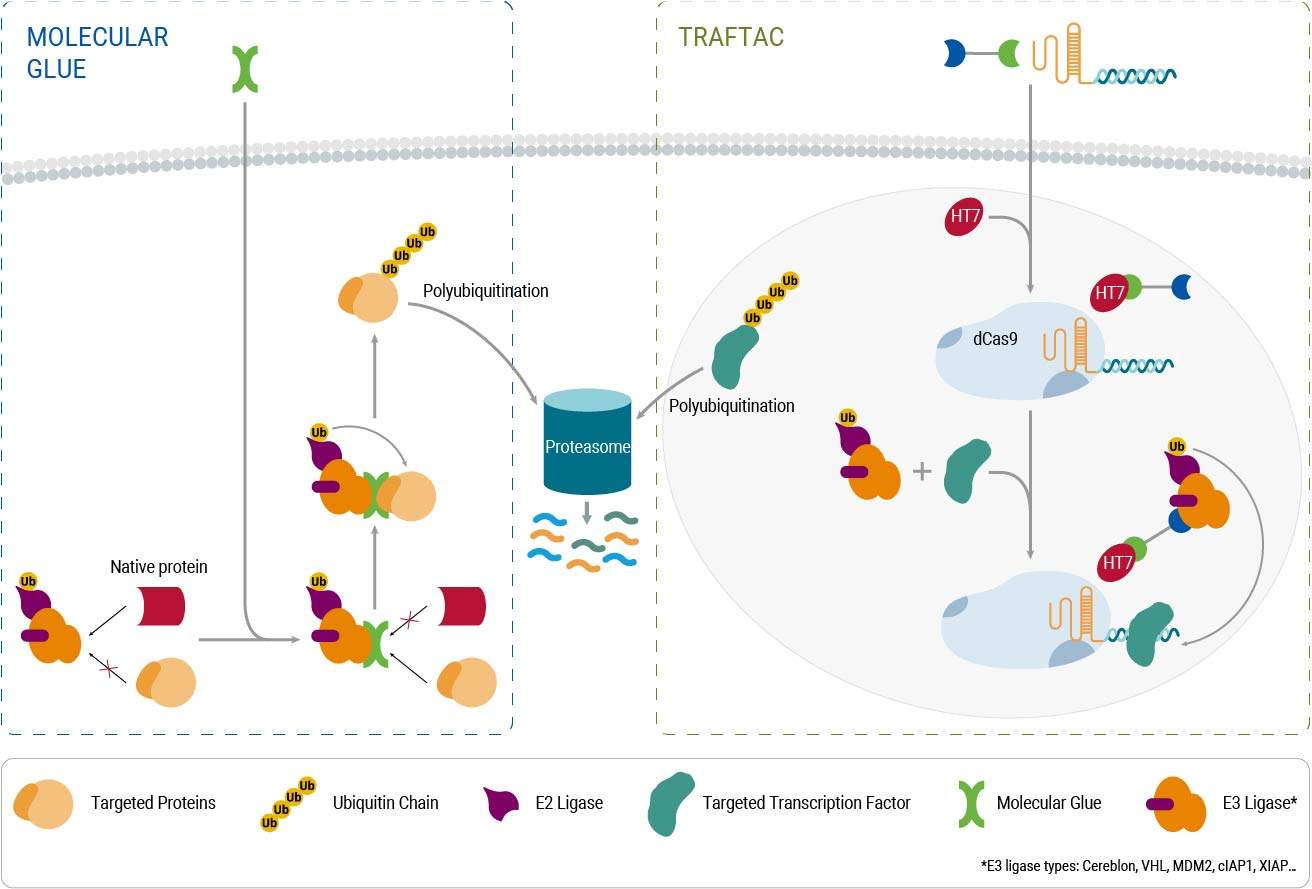 An AuTophagosome TEthering Compound (ATTEC) is a bifunctional molecule capable of binding simultaneously to a target protein as well as the phagophore protein LC3. By doing so, the POI-ATTEC-LC3 complex is incorporated in a phagophore membrane, leading to its engulfment and proteolytic degradation once the phagophore merges with a lysosome to form an autophagosome.

The AUtophagy-TArgeted Chimera (AUTAC) consists of a specific binder for an intracellular target of interest and a guanine tag connected by a flexible linker. This induces S-guanylation of the target, and has been applied in the selective autophagic degradation of proteins as well as mitochondria. In the case of mitochondria, the guanine tag induced K63 poly-ubiquitination, which facilitated of mitophagy in a Parkin and PINK1-independent fashion.

Designed specifically to target cell membrane-bound and extracellular proteins, LYsosome-TArgeted Chimeras (LYTACs) make use of the lysosome degradation pathway by recruiting proteins to lysosome-shuttling receptors located at the cell surface. LYTACs consist of a POI-binding element linked to a moiety that allows transport into the cell via lysosome-shuttling receptors, where it will get degraded by the endosome/lysosome pathway. The first example of such a moiety consisted of a chemically synthesized glycopeptide ligand, an agonist of the cation-independent mannose-6- phosphate receptor (CI−M6PR). Another study focusing on Human hepatocytes (HCC) used the liver-specific asialoglycoprotein receptor (ASGPR) using a triantenerrary N-acetylgalactosamine (tri-GalNAc) motif as it displayed more efficient uptake than M6Pn-LYTAC owing to the higher surface expression of ASGPR in hepatocytes. 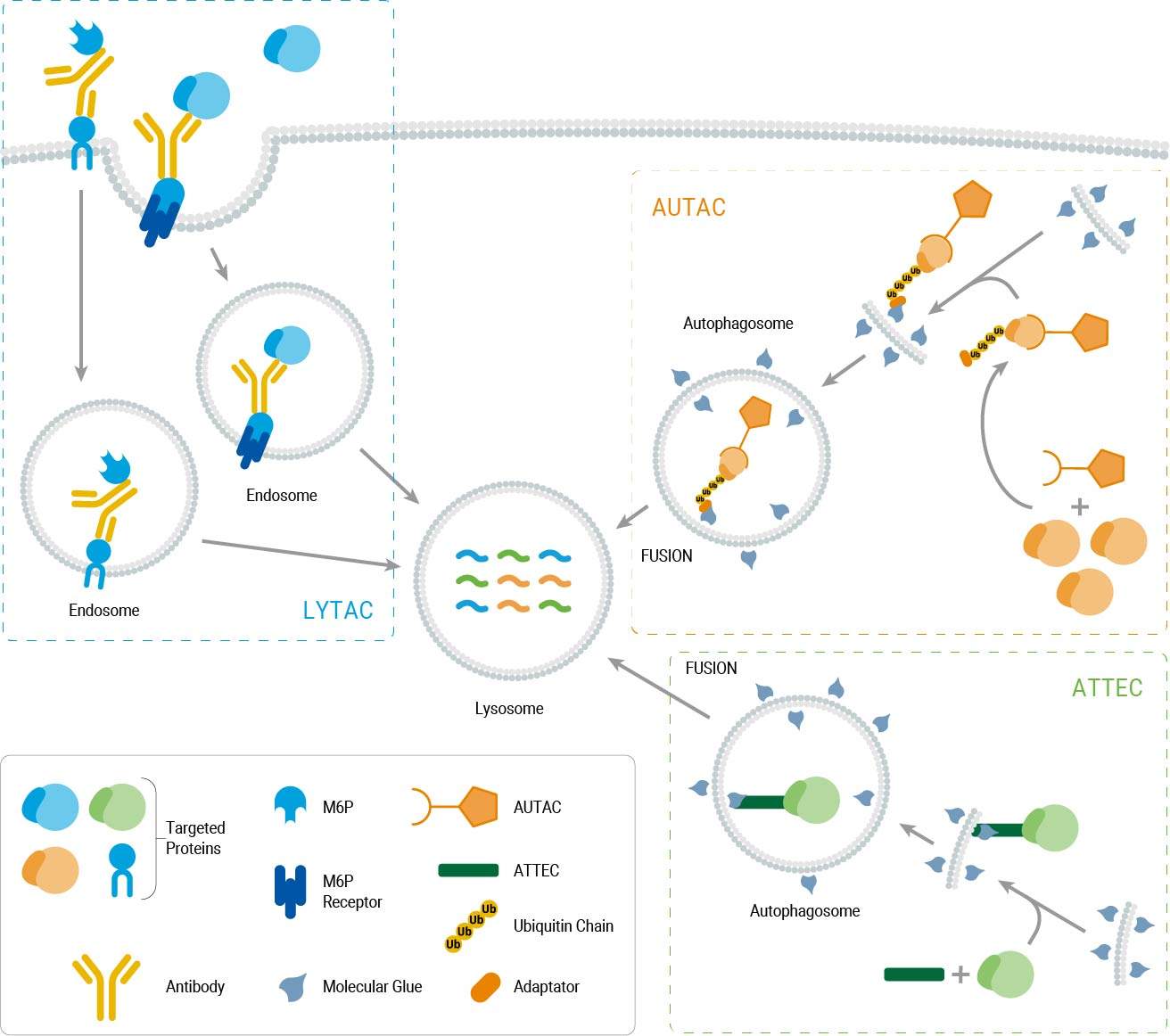 As with PROTAC®s, PerkinElmer’s AlphaLISA and HTRF reagents can help research on the development of the other targeted degradation technologies, either in conjunction with the CETSA® method, or standalone kits for transcription factors, kinases and protein-protein interactions.